Sarandë or Saranda a coastal town in Vlorë County, southern of Albania. Geographically, it is situated on an open sea gulf of the Ionian Sea in the central Mediterranean, about 14 km (8.7 miles) east of the north end of the Greek island of Corfu. Saranda typically has over 300 sunny days a year.
One of the best ways into Albania is via the ferry from Corfu to Saranda in southern Albania. What follows is the practical information of what you need to know to make that process easy and – hopefully – trouble free.

The city is known for its blue deep waters of the Mediterranean. Near Sarandë are the remains of the ancient city of Butrint, a UNESCOWorld Heritage site. In recent years, Saranda has seen a steady increase in tourists, many of them coming by cruise ship. Visitors are attracted by the natural environment of Saranda and its archaeological sites. Sarandë has a large Greek population and is considered one of the two centers of the Greek minority in Albania.
Saranda is a quintessential Mediterranean destination located in the Southern part of Albania, experiencing five months of warm weather yearly and enriched with a number selection of dreamlike beaches. Tourists troops into the unofficial capital of the Albanian Riviera, in the summer to enjoy the busy beach and buzzling nightlife along its crowd-filled seaside promenade. You can savor what saranda have to offer with family by visiting natural landmarks, villages, natural reserves and Museums.

It’s a prosperous region with varied attractions, plants and mountains, rivers and lakes, springs and virgin beaches, citrus plantations, olive groves and vineyards, pastures and woods, fish and shellfish farming, desirable hunting places. In short, the right place for the development of tourism. Saranda’s stony beaches are quite decent and there are plenty of sights in and around town, including the mesmerizing ancient archaeological site of Butrint and the hypnotic Blue Eye Spring. Between Saranda and Butrint, the lovely beaches and islands of Ksamil are perfect for a dip after a day of exploring.

Where to go – What to see

The Spring (Syri I kalter): The Blue Eye is a 50 meters deep ground spring which pumps drinkable, crystal clear water, to the earth surface. The beauty of Mother Earth is exceptionally displayed as you can clearly see the algae and other wildlife on the bottom of the surrounding area thus giving it the beautiful blue color. 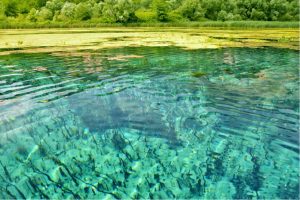 Lekursi Castle: The historic castle was built in 16th century (circa 1537), and situated on a hilltop, overlooking Saranda. The castle was built for security purpose, as the location is a vantage point to spot potential invaders who might come on boat. There are excellent views of Islands of Ksamil and Corfu from the castle. 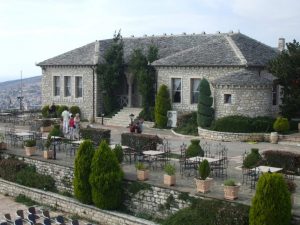 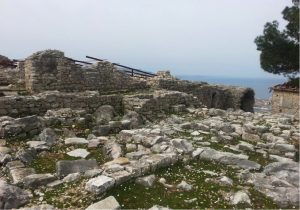 Mirror Beach: In the South of Saranda, along Ksamil village is this secluded natural bay. It is regarded as the best beach on the entire Albanian Riviera. The tranquil remote beach offers snorkeling with fewer tourists, who find their way here.

Butrint: The ancient city of Butrint is in the vicinity of Saranda. The UNESCO archeological park is a microcosm of European history with ruins from major empire; Greek, Byzantine, Ottoman and Roman. The Greek amphitheater, which was later remodeled by the Romans, is a high spot here. You will also find interesting the cathedral, the baptistery, the cathedral, the lion’s gate. 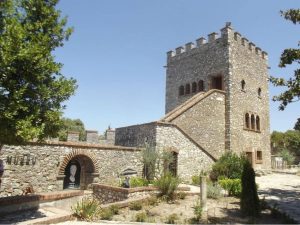 Saranda Bay: Saranda’s main beach is The horseshoe bay is a mixture of sand and pebble that can be found next to calm blue Ionian waters. The beach is Saranda’s main beach and equipped with beautiful European seaside getaway facilities. There are sunbeds, paddleboats by the shore and the beach is skirted by a promenade.
Others include Phoenice, Borshi beach, Saint Charalampos Orthodox Church, Santa Quaranta beach, Pulebardha Beach, Saranda Embankment and so on.

What to eat in Saranda:

Albanian cuisine is a mixture of Mediterranean and Balkan traditions. Saranda, which lies in the Southern part of the country, is known to feast on fresh fish and seafood’s. Saranda culinary was also influenced by Italian recipe; hence Pizza and pastas can easily be gotten everywhere. Lamb is consumed a lot in Albanian from lamb and yogurt stew (Tavë kosi) to Offal (Lamb liver) and also locals favorite kukurec, a spit roasted porchetta-like roll of meat and stuffed intestines, give them a try. Cheese of hundreds of varieties are enjoyed by the residents and you cannot leave samand without having a bite of octopus or mussels dishes. And who go to Saranda without tasting Skandenberg, the Albania cognac beverage made from grape alcohol.

What to buy in Saranda

Saranda is characterized with cheap but unbelievably high-quality spices. They are various herbs, natural vinegar, bay leaf, parsley, garlic, mint, rosemary, sweet basil and many more. Pleasant trifle are always a good buy especially the ashtray which is the main Albania souvenir that can be best cherished when it’s History is known. On the opinion of many tourists the most elegant, nice and real Albanian souvenirs are Christmas tree decorations (Christmas balls, garlands and glass figures). They are manually made from high quality glass and adorned with traditional national patterns, which are passed on from generation to generation throughout the centuries. Silver jewelry happens to be the only high-class gift that can be bought in Saranda. The oldest artistic craft of the Albanians is Silver processing. Silver Ring, earrings, necklace and pendant are made here. You can’t get quality silver wears cheaper in any part of the Europe.
Debit and Credit Cards are not widely accepted in Albania; as such you will want to make sure you have LEK or EURO. Many restaurants, grocery stores and hotels, especially in the high season, will accept euro for payment and return LEK for change.